The electrowinning process, called ULCOWIN under the ULCOS project, is a low-temperature electrolysis process that produces solid state elemental iron from iron ore. 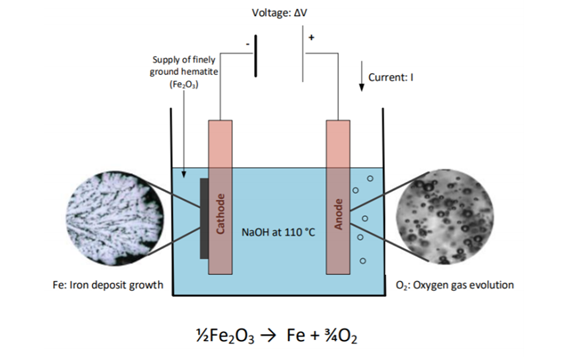 Iron ore (or hematite, Fe2O3) particles are suspended in an alkaline electrolyte solution at about 100-110 ℃. A current passes through the solution, from anode to cathode. Oxygen particles (with negative charge) are attracted to the anode, and are released at the surface of the solution, and elemental iron (with positive charge) forms crystals on the surface of the cathode. (Junjie 2018)

The iron is then fed into an electric arc furnace (EAF) with a small amount of coke (or other carbon source for steelmaking) to make liquid crude steel. This iron can also be combined with scrap steel in the EAF, though this factsheet assumes that the iron input comes entirely from virgin iron from electrowinning. The EAF is a well-known, commercially mature technology that is widely used to produce mainly secondary steel using scrap and virgin materials. (European Commission 2016)