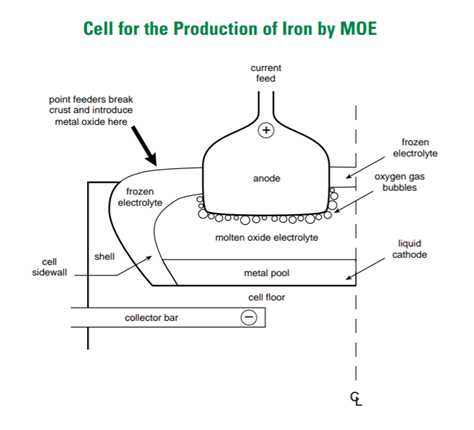 The particular technology developed by the ULCOS (ultra-low carbon steelmaking) project is called ULCOLYSIS; researchers at MIT have developed a similar process, now spun out to a company called Boston Metal. Molten oxide electrolysis processes were originally researched in order to allow oxygen production in lunar explorations from metal oxides present on the moon, and the application as a steelmaking technology developed later.

Molten oxide electrolysis, or ULCOLYSIS, does not require coke ovens or blast furnaces, and operates with electricity as its primary energy input, and therefore has a potential to reduce both cost and emissions relative to conventional steelmaking processes. Similar electrolytic processes are commercialized for other metals (aluminium, zinc, and nickel, for example).

Iron ore is first dissolved in a liquid electrolyte solution at a temperature of about 1600 ℃ (above the melting point of iron). Electrical current is passed through the solution from an anode and the pool of liquid iron that acts as the cathode, and iron ore is reduced into liquid iron in an endothermic reaction.

The iron then requires a carbon source to provide the carbon content of steel. This process is coupled with an electric arc furnace (EAF) with carbon input (provided by an injection of pulverized coal, scrap steel or biogenic carbon from biomass, for example) to create liquid steel