This factsheet presents generalized information and figures on heat networks for the built environment also known as district heating. In district heating homes, non-residential buildings and other end users such as horticulture, are heated by a central heat source via an underground network of hot water pipes. 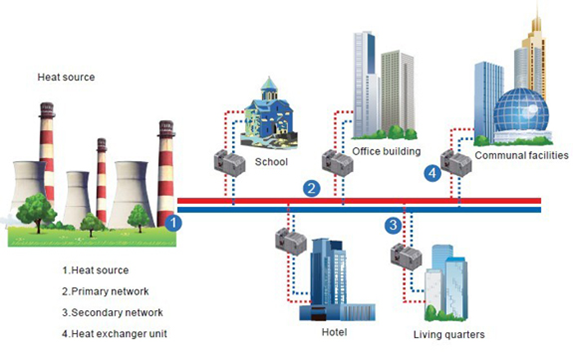 In terms of number of end users with district heating in the Netherlands, the number of households with district heating is much larger than the number of other end users (ECN, 2017; ECN, 2015). District heating consist of main heat source(s), back-up boiler(s), a primary heat transport pipeline, substations and a distribution network including connections to the buildings. Inside a building a heat delivery kit (with heat exchanger) is installed in order to transfer hot water to the central heating system inside the building. This factsheet considers all components of the heat network. It does not include heat losses of the main heat source(s) and heat losses of the heating systems inside the buildings. Costs in the costs section are excluding costs of the main heat source.

Main heat sources that can be used for large scale high temperature heat networks are:

A small scale network consists of a heat source (currently mostly natural gas fired CHP) and a distribution network including connections to the end users, which can also consist of non-residential buildings.