Dynamic Tidal Power (DTP) is a technique which generates energy from the interaction between a tidal wave running along the coast and a dam that is tens of kilometers long at a right angle to the tidal wave. Two new tidal waves are created along the entire length of the dam, which are exactly in opposite phase to each other. So whenever a new crest appears on the left along the dam, there is a new valley on the right, and 6 hours later the other way around. 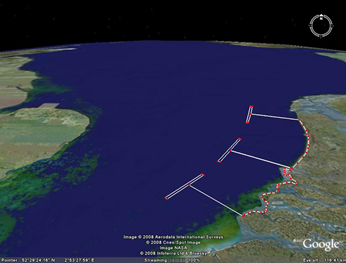 As a result, along the total dam length, the head changes in size and direction over time. By creating openings (approx. 10% is considered optimum) for turbines in the dam, electricity can be generated (Hulsbergen, 2008, May, 2012). There are several variations of DTP, of which the two most important are: (1) a dam of 30 to 50 km from the coast with a perpendicular dam (T-profile) of several tens of kilometers at the end. (2) a dam of 30 to 50 km not connected to the coast with a so-called whale tail at both ends (Walraven, 2020). The yield of a DTP system increases with the length of the dam by a power of 2.5 (Hulsbergen, 2008). A 50 km dam therefore provides considerably more energy per kilometer at a lower cost than a 30 km dam. Mei (2020) applies an analytical model in which almost the same drop over a straight dam of 20, 30, 40 and 50 km is found as according to the approach of Kolkman and Hulsbergen (2005, 2008).