A nuclear reactor produces and controls the release of energy from splitting the atoms of certain elements. Then, the energy released in the nuclear power reactor is used as heat to make steam to generate electricity. Most nuclear reactors use enriched uranium as a nuclear fuel.

The most common nuclear reactor design is the pressurised water reactor (PWR), which has water under pressure at over 300°C in its primary cooling/heat transfer circuit and generates steam in a secondary circuit. The boiling water reactor (BWR) design however, makes steam in the primary circuit above the reactor core, at similar temperatures and pressure. Both types use water as both coolant and moderator, to slow neutrons (World Nuclear Association, 2018). 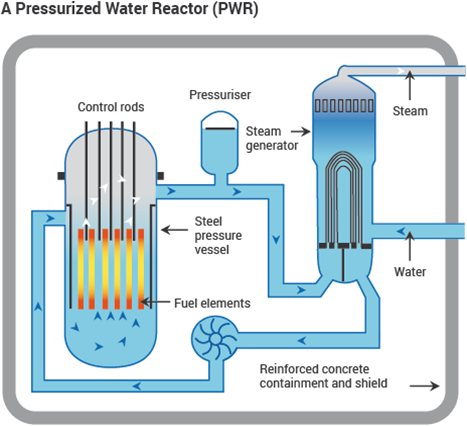