Ocean Energy Thermal Conversion uses temperature differences between warm surface water and cold deep ocean water to generate electricity. Warm surface water evaporates a working fluid, which drives a turbine to generate electricity, after which the working fluid is condensed again by the cold ocean water. OTEC exploits temperature differences of more than 20 °C, for which a sea-depth of approximately 1 km is required. 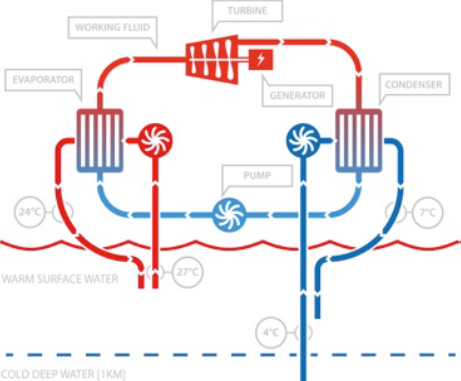 The efficiency of an OTEC installation is low (7%), but this makes little difference because no costs are incurred for the energy source. Due to the relatively low temperature difference, large amounts of water (750 tons per second with a 100 MW installation) and large pumps are required – which is the main technical challenge. (IRENA, 2014)

There are several variants of OTEC: closed-cycle, Kalina cycle (variant of closed-cycle), open-cycle and hybrid systems. Closed systems use ammonia or another working fluid to drive the turbine. Open systems use evaporated warm surface water to power a turbine, after which it is condensed using cold seawater. After condensation, fresh water remains that can be used. Open systems require a large surface area for evaporation, making open systems less scalable than closed systems. Closed systems can also work with smaller pipes, smaller turbine diameters and require less surface area for heat exchangers. The efficiency of closed systems is also higher than that of open systems. Closed systems are therefore cheaper than open systems. All types of installations can be on land, at sea and floating. With floating systems, the platform and connection to the grid are more expensive, but from a certain size of installation, seawater inlet pipes are cheaper to fix vertically under a floating platform than to extend to land. (IRENA, 2014; Allseas, 2020)

These fact sheets focus on closed systems. It is assumed smaller systems (up to 3 MW) are land-based and that larger systems are floating installations.